Payload Size and Max PPS on AWS EC2 - No Effect

By Matthew Barlocker on November 8, 2018

While benchmarking packets per second (PPS) in AWS EC2 and searching for hard-coded or other software-based limitations, my early findings suggested that there definitely was a credit mechanism, complete with network throttling, in place. I now know that to be false, since finding the guaranteed throughput / best effort mechanic. Still, given the expectation of a hard-coded limit or credit, I designed and ran a secondary test to verify that AWS was limiting the number of packets, not the bandwidth or packet’s overall payload.

This is the fourth post to our series investigating PPS measurements in Amazon EC2. Here are the other posts in the series:

But first, a rant about Cloudwatch…

I’ve been writing this blog series over a long period of time. I knew that it would be a while before I wrote this post in particular. I made a list of the data I needed and granularity I needed it at. I needed these two things.

Packets per second at 1-second granularity. I knew Cloudwatch would suck here — it’s well documented that Cloudwatch only stores at 5 minute intervals (or 1 minute if you use detailed monitoring, which I did). Since I knew about this, I orchestrated my own statistics that are available in the Github repo for the benchmarking project.

Bytes per second at 5-minute granularity. In the main section of this post, I would have liked to have put a graph of my m3.large’s outgoing bandwidth compared to the outgoing packets per second. A 5-minute granularity was okay, because I didn’t need that many data points on the graph to show the lack of limitations on bandwidth. According to AWS’s post about new Cloudwatch retention (dated 1 Nov 2016):

While still within the 63 days, I checked back for the metrics in Cloudwatch. They were gone. Now, to everyone familiar with Cloudwatch, there are two places you can check the metrics for EC2 instances. The first one is from EC2’s “Monitoring” tab. This tab only shows the last two weeks — I knew that wouldn’t work. The second one — the one I checked — is in the Cloudwatch console. And mine are nowhere to be found. 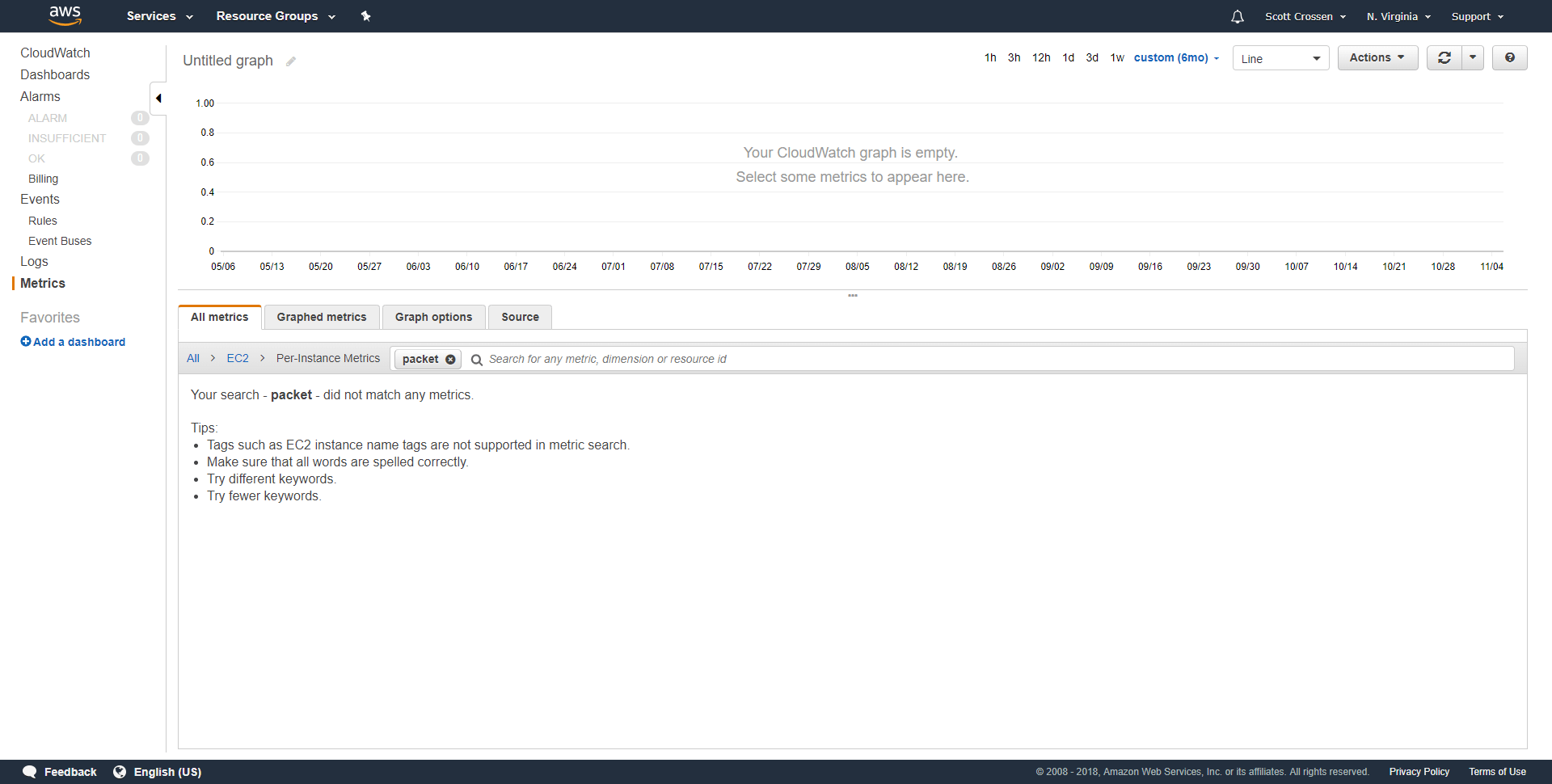 Notice that I’m looking for EC2 instance metrics with “packet” in the name, and there are none. I did this search on 5 Nov 2018, but the metrics were gone when I checked on 23 Oct 2018.

Each of my instances had “packet” in the name. I also tried searching for “matthew”, “limit”, as well as an empty search and looking through the metrics myself.

I suspect that there is an undocumented feature where Cloudwatch deletes metrics for Stopped instances after an undefined amount of time less than the published number. That’s the only thing that makes sense. But, for a product that seems to have a lot of documentation, release logs, and visibility, Cloudwatch definitely messed up this time.

Rant over… On to the main event.

In the middle of the PPS test, and while all the rest of the servers continued running unaffected, I stopped the test on my m3.large instance, and made a change to the running application. I commented out the packet size [1] and replaced it with a larger amount [500].

The MTU on Amazon’s network is 1,500 bytes, so my large payload still fits securely inside of a single UDP packet. The only change I expected to see was the bytes per second. The only data I have of bandwidth is with all the tested servers. I wanted to show just the single m3.large, but Cloudwatch lost my data (see previous heading).

The effect on bandwidth is pretty obvious in the graph, that confirms that my code change was in effect. As for the PPS, I expected no change whatsoever, but was a little surprised at seeing the graph: 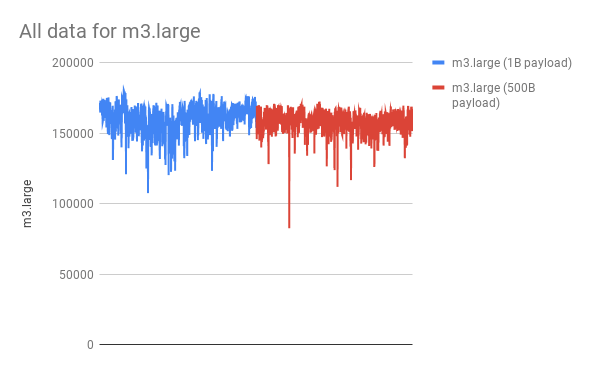 When you include the guaranteed throughput vs best effort in the mix, the numbers are a little different, but larger payloads still get the shaft. For guaranteed throughput, larger payloads have, on average, 0.77% less PPS; and for best effort, larger payloads have, on average, 1.66% less PPS. All my data is contained in this Google Sheet. Like before, some of my calculations are performed using scripts on the raw 1-second data contained in the Github repo, because Sheets can’t handle that much data.

While it is a measurable difference, and certainly interesting visibility into AWS networking internals, I am not suggesting that you should optimize your application to send smaller payloads across the network. That’s a dumb idea.

I am, however, suggesting that there are a lot of moving parts when you’re hosted in AWS. If you have mission-critical software running in the cloud, you need the experts managing your alerting. Blue Matador autonomously regulates your alerts and thresholds, without your input, to notify you of alerts, warnings, and anomalies that are threats.